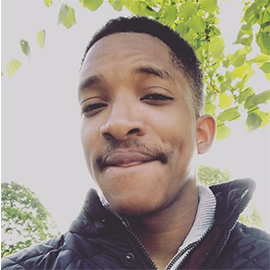 Hashim Ruan has been researching and operating in the field of science and technology for the past eight (8) years. He is currently pursuing a Bachelor of Science in Design and Innovation with a focus on design engineering and technologies with specialization at the Open University in London.

Hashim Ruan was keen on technology and innovation from a very young age and has put his acquired knowledge to the test. He has designed and developed a few concepts which he presented to local firms on his native St. Kitts such as O. D Brisbane & Sons.

In 2014 Hashim Ruan was invited to the United Kingdom to register and establish a tech startup called Nanostar Limited, now Leaf Inc. He has since gone on to file his first patent pending status and has advanced himself in a market which he initially did not quite understand. His academic achievements to date are as follows:

His business achievements are as follows: • Former CEO and Founder of Nanostar Limited now reborn as Leaf Inc.™ • Co- Chairman of the Youth Extravaganza Explosion of Arts (Mr Ruan ran campaigns for cancer and has raised hundreds of dollars) • Co-founder of SKN INSPIRE ACADEMIA, which was recently formed.